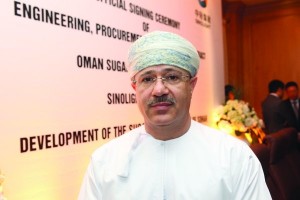 Sohar freezone plans to carry out a study in the third quarter of this year to assess the global market scenario and how to take advantage of the country’s strategic location for developing a major logistics and redistribution hub for the region.

The free zone is evaluating cargo flows to device a marketing strategy for next expansion phases and chart-out a way forward.

“We are paying special attention on logistics, warehousing activities, consolidation and distribution of goods. Our strategy for the future will look at how we can realise investments, especially in logistics and other industries,” Jamal Aziz, chief executive officer of Sohar Freezone, told journalists on the sidelines of a signing ceremony to develop a copper tube mill in Sohar.

“We are looking at various scenarios at the world economy and how it is going to develop and from there look at our investments, how we are going to invest in the years to come.”

He said that there is a shift in focus on attracting investments to the free zone. “Earlier, we were focusing a lot on commodities because the commodity market was very good. Now the commodities markets are down. So, it makes more sense to look at inventories, warehousing, storage and distribution of goods. We also focus on connectivity to various markets,” explained Aziz.

Referring to the proposed food cluster within the free zone, he said that there will be some announcements of projects, which will be part of the major projects that are already proposed to come up within the area.

On the proposed silos project, he said that the Oman government is looking at various investment models to develop the project and the work is expected to start either later this year or early next year.