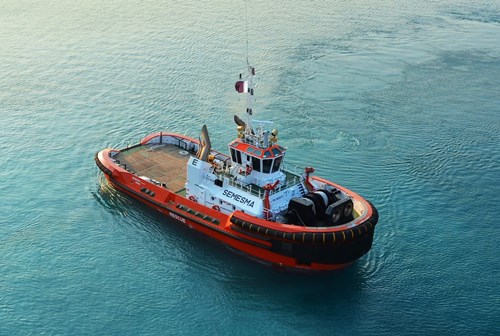 Built entirely at the Erhama Bin Jaber Al Jalahma Shipyard in Ras Laffan Industrial City, the vessels were launched and delivered to NPP after successful completion of their sea trials, said a statement from the company.

Measuring 15.4 m long with a beam of 5 m and a speed of 25 knots, the two Damen Stan Pilot 1505 pilot boats Um Alhoul 1 and Um Alhoul 2 will be used to carry out pilot duties and the transportation of personnel, it said.

The three Damen Stan Tug 1606 mooring boats, Mwani 1, Mwani 2 and Mwani 3, measure 16.7 m long with a beam of 5.9 m and have a bollard pull capacity of 13.7 tonnes. These vessels will be used to assist ships entering and departing the port, it added.

Eng Abdullah Al-Sulaiti, managing director, Nakilat, said: “We are pleased to be delivering the first five vessels for NPP.”

“This project is a reflection of hard work incorporated with vision that has worked well on all levels: successful new builds for a local client at Erhama Bin Jaber Al Jalahma Shipyard, based on a proven design,” he said.

“The cooperation between our company and NPP is an excellent example of how local organisations are working together to support the development and growth of our local economy, that will in turn contribute to the achievements of Qatar National vision 2030,” he added.

Captain Abdulla Al Khanji, Mwani - CEO and NPP - general supervisor, said: “Hamad Port is being developed as a world-class facility as befits the State of Qatar.”

“The delivery of these vessels is an important milestone in the development of the project. The completion of these marine units represents the culmination of a successful collaboration between NPP and NDSQ,” he said.

“To have vessels of such outstanding quality manufactured in Qatar, for use in Hamad Port is testament to the professionalism of all those involved,” he concluded.