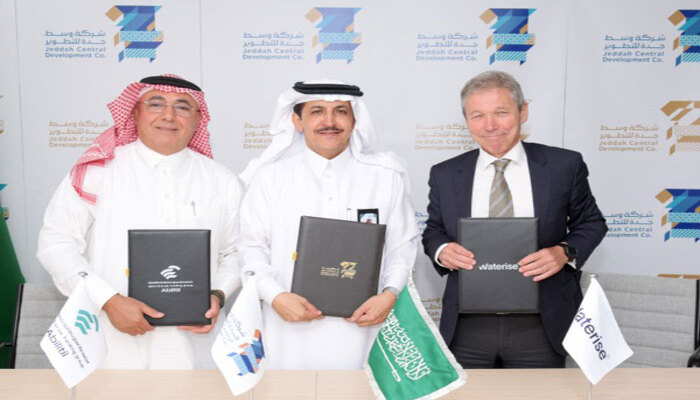 JCDC, a wholly-owned subsidiary of the Public Investment Fund (PIF), signed the Memorandum of Understanding (MoU) with Waterise, a global leader in sustainable water infrastructure development, and Ajlan & Bros Holding Group, one of the leading investment holding company conglomerates in the Middle East.

The new technology will help JCDC achieve its sustainable development objectives, which are in line with the kingdom’s broader Vision 2030 efforts to maintain and enhance its natural environment. The project also aligns with the Public Investment Fund’s efforts to help the kingdom further develop its utilities and renewable energy sector while reducing its carbon footprint.

It will also contribute to the success of the National Water Strategy, which aims to create a more sustainable water sector, safeguard the kingdom’s environment and natural resources.

Commenting, Eng Ahmed Al-Sulaim, CEO of JCDC, said: “Desalination technology is widely used across our region, and has helped sustain the Gulf’s rapidly growing population for many years. Jeddah’s unique geographical location along the Red Sea makes it ideally suited to this deep sea desalination technology. Through this new partnership with Waterise and Ajlan & Bros holding Group, we look forward to making our city and the kingdom a leader in water in the years to come.”

Furthermore, Waterise’s use of hydrostatic pressure (the natural deep sea pressure) in its operations can reduce desalination energy consumption by up to 50%. Due to the lower organic content of the deep-sea water in use, a significantly less intensive pre-treatment process will also contribute to the project’s overall sustainability as well as removing any interference with flora and fauna.

Commenting on the company’s commitment to environment-friendly practices, Niels Petter Wright, CEO of Waterise, said: “We are proud to support JCDC with implementation of the environmentally game changing technology for supply of water and thus the overall sustainability objectives of JCDC and the kingdom.”

Eng Ali Abdulrahman Alhazmi, CEO Ajlan & Bros holding Group, said: “We believe in the vital importance of desalination technology for the continued prosperity of our kingdom. The urban and infrastructure planning model that JCDC is pioneering today will pave the way for countless other developments of similar scale across Saudi Arabia.”