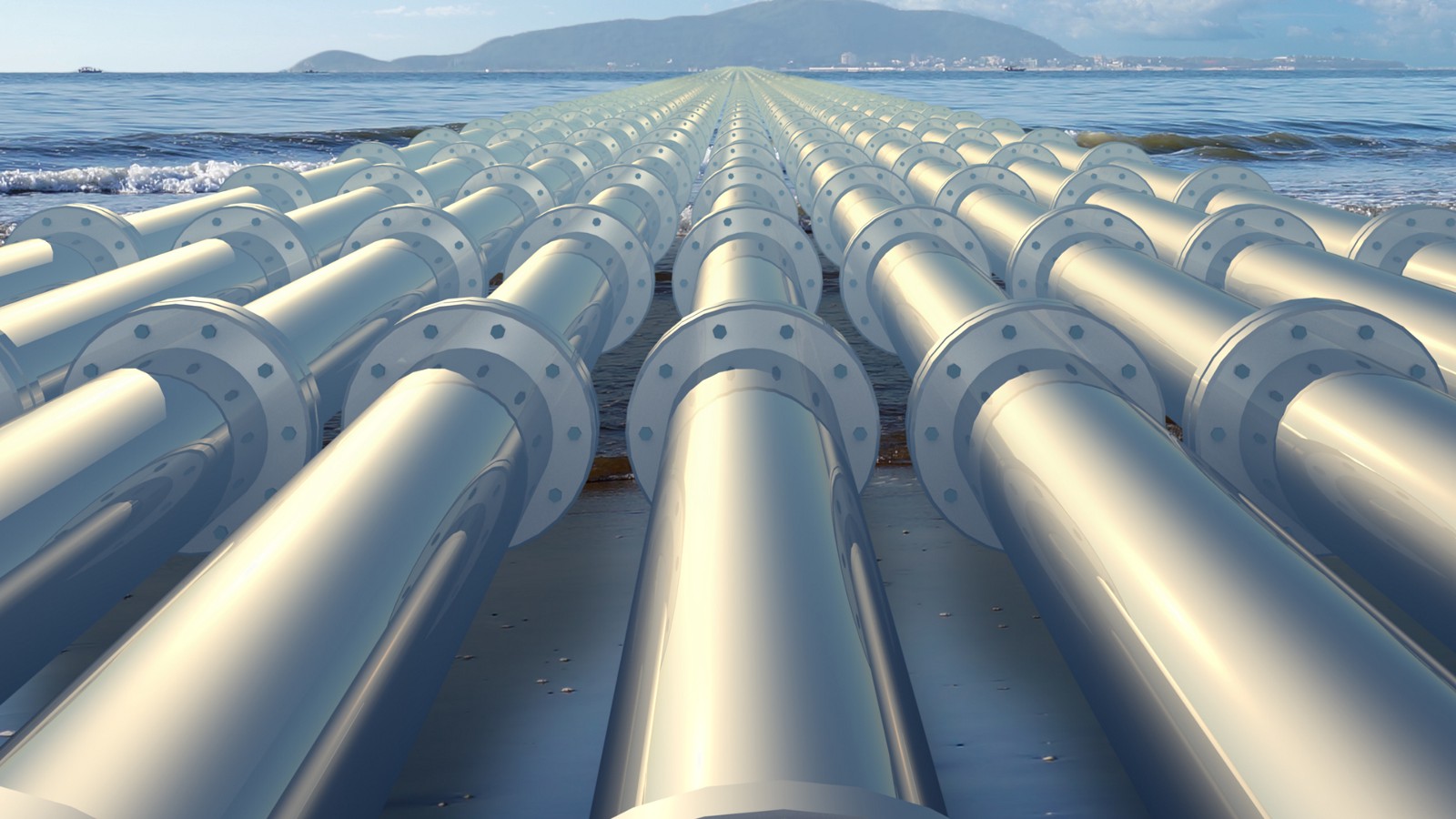 The Abu Dhabi National Oil Company (Adnoc) announced that it has entered into a landmark multi-billion-dollar midstream pipeline infrastructure partnership with KKR and BlackRock, two of the world’s leading institutional investors.

To mark the occasion, a signing ceremony was held at Adnoc Headquarters with Dr Sultan Ahmed Al Jaber, UAE Minister of State and Adnoc Group CEO; Laurence D Fink, Chairman and CEO of BlackRock; and Henry Kravis, co-chairman and co-CEO of KKR.

The entity will, in turn, receive a tariff payable by Adnoc, for its share of volume of crude and condensate that flows through the pipelines, backed by minimum volume commitments. Funds managed by BlackRock and KKR will form a consortium to collectively hold a 40 per cent interest in the entity, while Adnoc will hold the remaining 60 per cent majority stake.

Sovereignty over the pipelines and management of pipeline operations remain with Adnoc. The transaction will result in upfront proceeds of approximately $4 billion to Adnoc and is expected to close in Q3 2019, subject to customary closing conditions and all regulatory approvals.

BlackRock and KKR’s long-term investment underlines the attractiveness of Abu Dhabi and the UAE as a rapidly emerging investment destination for international capital. This transaction marks the first time that leading, global institutional investors have deployed capital into key midstream infrastructure assets of a national oil company in the Middle East.

In conjunction with this transaction, Adnoc is laying the groundwork for additional infrastructure-related investment opportunities with institutional investors. Adnoc’s 60 per cent equity stake in Adnoc Oil Pipelines will be held through Adnoc Infrastructure LLC, a 100 per cent Adnoc-owned subsidiary, which also holds Adnoc’s 100 per cent stake in Abu Dhabi Crude Oil Pipeline (Adcop).

Commenting on the transaction, Dr Al Jaber said: “The level and sophistication of the investors that we are attracting as financial partners to invest, alongside Adnoc, in these select pipeline assets is a clear reflection of the UAE’s stable, attractive and reliable investment environment. It also demonstrates the global investment community’s validation of Adnoc’s progressive and smart approach to unlocking value from its portfolio of assets while retaining control over their ownership and operation.”

“This transaction is another example of the innovative steps we are taking to constantly optimize our assets and capital and deliver sustained value to both Adnoc and the UAE. We are creating a range of attractive opportunities for global and regional institutional investors to partner and invest alongside Adnoc to enhance value from our sizeable infrastructure base, drawing on our expertise in structuring and packaging value-enhancing partnership programmes that preserve Abu Dhabi’s ownership and control of its assets. Most importantly, this transaction marks a milestone for Adnoc and Abu Dhabi as it paves the way for further significant foreign direct investment into the UAE.”

Commenting on the transaction, Kravis said: “We have created an innovative core midstream infrastructure platform alongside Adnoc and BlackRock that can be a catalyst for further foreign investment and broader economic transformation in the UAE. Having long had a presence in the region, we appreciate the high quality of Adnoc as a partner and Abu Dhabi’s investor-friendly environment to enable our first direct investment in the region. With this transaction as a precedent, we believe there is substantial potential to do even more.”

“For many years BlackRock has had strong relationships in the UAE and across the region, so we are especially pleased to be able to play a role in this landmark transaction,” said Fink. “Public-private partnerships are essential for investment to drive continued economic growth in the region, and we believe that the agreement among Adnoc, BlackRock and KKR will be followed by many more such partnerships to invest in the future growth of the region.”

As announced in July 2017, Adnoc is significantly expanding its strategic partnership model and creating new investment opportunities across all areas of its value chain, while at the same time, more proactively managing its portfolio of assets and capital.

This transaction follows several other recent value creation initiatives including Adnoc’s debut capital markets transaction, the issuance of the Abu Dhabi Crude Oil Pipeline (Adcop) bond, the IPO of Adnoc Distribution, the recent strategic equity and commercial partnerships between Adnoc Drilling and Baker Hughes as well as Adnoc Refining and Eni and OMV.

Fitch Ratings also recently assigned Adnoc a standalone credit rating of AA+ and a Long-Term Issuer Default Rating of AA with a Stable Outlook. Both ratings are the highest currently assigned by Fitch for any oil and gas company, globally.

The deal represents a major step in Adnoc’s commercially focused 2030 smart growth strategy, marked by significant milestones of the last three years. The company has consolidated its businesses and unified its brand identity; entered the global capital markets for the first time; completed the first ever IPO of an Adnoc business; opened-up its concessions to new strategic partners; competitively tendered new exploration blocks for the first time in Abu Dhabi’s history; launched the UAE’s unconventional industry; embarked on an ambitious gas strategy aimed first at self-sufficiency and then transitioning to become a potential net exporter of gas; launched a major $45 billion expansion to its downstream operations; undertaken a comprehensive digital transformation and taken its first steps to expand internationally.

Guided by the strategic pillars of People, Performance, Profitability and Efficiency, Adnoc is creating a dynamic corporate culture that optimizes resources, maximizes value and incubates talent. In 2018, Adnoc achieved its 3.5 mbpd production capacity target and last month was named the most valuable brand in the Middle East.

KKR’s investment was made through its third Global Infrastructure Investors fund, which closed in September 2018 at $7.4 billion. KKR invests in infrastructure assets on a global basis, with $12.6 billion in assets under management within its Infrastructure strategy. This investment in Abu Dhabi builds on KKR’s global midstream expertise in sourcing and structuring transactions with high-quality counter-parties, including existing investments in the US DJ Basin and Gulf of Mexico, Canada’s British Colombia and Alberta Montney regions, and Mexico’s Bay of Campeche.

BlackRock is investing through its Global Energy & Power Infrastructure Fund (GEPIF) series, which, for the last decade, has provided investors with a market-tested strategy of investing in stable, mission-critical, high-quality contracted energy infrastructure on a global basis.

This contracted midstream investment, located in Abu Dhabi, is consistent with the Fund’s strategy of serving as a long-term, value-added partner to world-class energy industry players to provide a customized solution for both the Fund and the counter-party with an investment that is structured with a focus on downside protection and a highly deliverable base-case. BlackRock’s GEPIF Funds have successfully employed this consultative and tailored approach to investing in contracted energy & power infrastructure on four continents, throughout North America, South America, Europe and Asia and delivered income and returns to its investors across market cycles.

This collection of 18 pipelines being leased by Adnoc Oil Pipelines has a total length of over 750 km, and a total aggregate capacity of approximately 13,000 mbpd (gross). These assets represent key midstream infrastructure for Abu Dhabi’s energy ecosystem, allowing for the vast majority of Abu Dhabi’s crude oil production to be transported from Adnoc’s onshore and offshore upstream assets, to Abu Dhabi’s key take-away outlets and terminals for conversion to other high-value products, or on to global energy markets.

The pipelines have underlying long-term minimum volume commitments and are supported by stable crude oil production from Adnoc Onshore and Adnoc Offshore - the leading onshore and offshore operating companies in Adnoc with global IOCs as JV partners, each with an average remaining concession life of over 35 years.