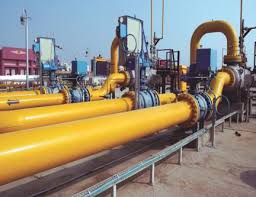 State-owned gas utility GAIL India Ltd will invest over ₹450 billion over the next five years to expand the National Gas Grid and city gas distribution network, its chairman Ashutosh Karnatak said on Tuesday. "At present, your company is expanding the natural gas pipeline network by executing more than 5,700 kilometers of major projects," Karnatak said at the company's annual general meeting of shareholders here.

Later talking to reporters, he said the investment would span over the next five years. Of this, ₹320 billion would go into pipeline laying and another ₹120 billion in city gas distribution (CGD) networks for retailing of CNG to automobiles and piped natural gas to household kitchens. Investments would also go into the expansion of petrochemical plants. GAIL is looking to put up 400 CNG stations and give out a record 1 million piped natural gas (PNG) connections to household kitchens in the next 3-5 years.

It is rapidly building infrastructure to support the government push towards a gas-based economy by raising the share of natural gas in the energy basket to 15 per cent by 2030 from current 6.2 per cent. The company is building a 2,655-km gas pipeline from Jagdishpur in Uttar Pradesh to West Bengal and Odisha. "Around 1,050 km of pipeline projects along Varanasi-Dobhi-Patna/Barauni, Auraiya-Phulpur and other last-mile connectivity were completed during the 2018-19 fiscal," he said at the AGM.

The pipeline would be extended to Guwahati by laying an additional 750-km line. At Guwahati, it would interconnect with the upcoming 1,500-km 'Indradhanush' pipeline network conceived to operate in northeast by the public sector oil and gas majors.

"Your company has recently been authorised by (regulator) PNGRB to lay the 600 km Srikakulam-Angul natural gas pipeline through the recently-concluded bidding process. This limb is expected to be an important segment of the National Gas Grid and enhance your company's coverage of natural gas markets along the eastern coast as well," he said.

Karnatak said the company's board has approved the utilisation of existing assets and premises of LPG plant at Usar in Maharasthra by converting it into 500,000 tonnes polypropylene complex at an investment of around ₹88 billion. "This is first of its kind project in India," he said, adding GAIL Board has also approved setting up of 60,000 tones polypropylene unit at the existing petrochemical facility at Pata in Uttar Pradesh. Polypropylene is used in a variety of applications, including packaging of consumer products, plastic parts of various industries including the automotive industry, special devices like living hinges, and textiles.