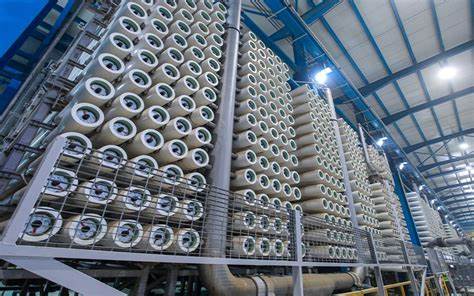 Saudi Arabia’s Saline Water Conversion Corporation (SWCC) has embarked on developing new technology for seawater desalination in cooperation with the Chinese Ministry of Natural Resources through its Institute for Research and Desalination Technologies Establishment.

This cooperation also contributes to strengthening relations between the Kingdom and China, and pushes for more communication through diplomatic channels and economic sectors in the fields of water desalination, in order to serve the development of technologies and raise performance efficiency to double the achievements in the areas of reducing energy consumption and localizing modern technologies.

The package of joint ventures in the field of desalination industry and technologies will bridge the global gap in water shortage and the scarcity of its natural resources due to its high production cost, and its need for innovative, economic, and environmentally friendly innovative capabilities and technology with higher production capacities that meet the increasing demand for water at the global level in conjunction to meet the growing population in recent years.

This Saudi-Chinese partnership comes as an extension of SWCC’s investment in its global leadership as the largest producer of desalinated water in the world utilizing the least consumption energy technology in its production system.

This leadership has sealed multiple international partnerships with a number of sectors and relevant authorities in the world, including the US, France, Russia, Spain, and Germany.