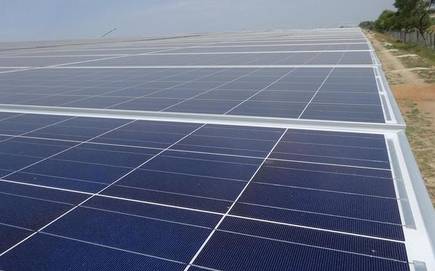 In what will rank among the largest clean energy deals in India, French oil and gas major Total SA will acquire 50% stake in Adani Group’s solar business for $510 million, the companies said in a joint statement. Adani Green Energy Limited (AGEL) has a 2,148 MW solar power project portfolio, spread across 11 states.

“Adani Green Energy Limited (AGEL) and Total Gas & Power Business Services SAS (TOTAL) have entered into a binding arrangement for investment of approximately USD 510 Million for acquisition of 50% stake and other instruments in a Joint Venture Company (JVCo) which will house 2,148 MWac operating solar projects presently 100% owned by AGEL. The balance 50% stake in the JVCo shall be held by AGEL," a statement said.

AGEL has an overall project portfolio of 6 GW including under construction capacity. Also, it has been a successful bidder in state-run Solar Energy Corporation of India Ltd’s tender of 8 GW manufacturing linked development project. “We are delighted to extend our long term partnership with TOTAL to our renewable energy business in AGEL," Adani group chairman Gautam Adani said in the statement.

Total, the world’s second-largest liquefied natural gas company, also plans to buy a 37.4% stake in Adani Gas for around Rs. 57 billion. The Ahmedabad-based group recently also announced the sale of 25.1% stake in its arm Adani Electricity Mumbai Ltd (AEML) to Qatar Investment Authority for around Rs. 32 billion. The transactions come amid a tough phase for India’s clean energy sector.

Rising dues to generators, when new solar tenders of around 15,000 megawatt (MW) are in the pipeline, have the potential to dent India’s image as a clean energy champion. With record low solar and wind power tariffs, banks are also wary of lending to renewable energy developers as they suspect the viability of such projects.

“Total is fully engaged in the energy transition and to supporting India, a key country in the fight against climate change, in diversifying its energy mix through partnerships in natural gas and now in solar energy, This interest in over 2 GW of solar projects represents a real change of scale of our presence in India's renewable energy sector, which has very significant growth potential in the coming years. It will contribute to our ambition to deploy 25 GW of renewable energy by 2025," Total chief executive officer Patrick Pouyanne said in the statement.

Total sells lubricants and LPG in India. It had, in 1998, commissioned a fully integrated LPG import terminal at Mangalore. It also has a minority stake in LNG import terminal at Hazira in Gujarat. India’s emerging green economy is staring at a potential investment need of about $80 billion till 2022, growing from than threefold to $250 billion during 2023-30.